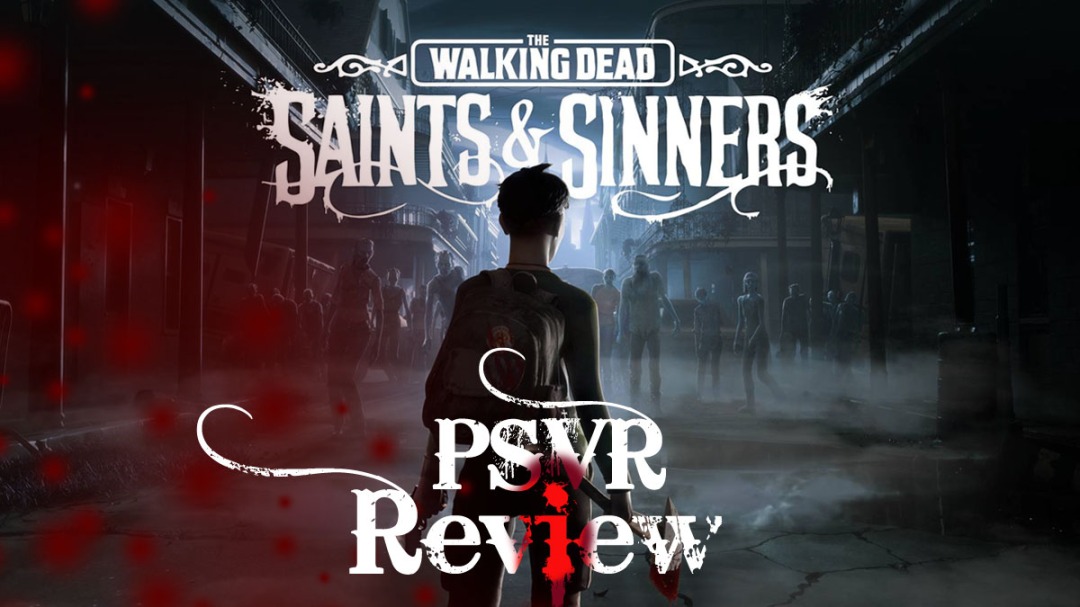 The Walking Dead: Saints and Sinners Review (PSVR) – For Whom The Bells Toll

“If you’ve been looking for a reason to pick up a PSVR and are a fan of zombie slaying, The Walking Dead: Saints and Sinners makes a pretty good argument to jump aboard.“

Whether you’re reading the comics or watching the TV series, The Walking Dead always has a way of keeping you engaged. From its story telling, characters and gritty atmosphere, it’s given us enough reasons to celebrate it as a definitive entry to the zom-pocalypse genre. The Walking Dead: Saints and Sinners carries over all these great things about the franchise while packing it neatly into virtual reality.

Rather than following existing stories from both primary medias, The Walking Dead: Saints and Sinners shares a slice of TWD universe by sending you to the half-sunken city of New Orleans. An ongoing war has divided this once great cultural melting pot, with each faction fighting for their territory and ideology. At the heart of their conflict however, is the Reserve, a military bunker that contains everything you need to survive the land of the dead. You play the role of the tourist, an unnamed but reputable survivor who arrives to New Orleans in search of what the Reserve promises.

The story and how it’s told is actually one of the game’s stand-out features. True to TWD fashion, drama and tragedy follow you from the first time you enter the city, to the last time you fire your gun. It doesn’t try to force down its existing lore, instead spreading pieces of it across the city and allowing players to put them together. This not only inspires curiosity, but also gives you the freedom to decide what to do next.

Choice is the narrative’s primary driving point, as it gives you the opportunity to shape the tourist to what you think they should be. On the one hand, this can be done through dialogue where you can either cooperate or shun various NPCs. On the other, you can be belligerent and kill everyone that gets in your way. No matter what you decide, whether in the main or any of the side stories, your morality is tested to its limits.

Seeing such a structured narrative was both surprising and pleasing, as not a lot of PSVR games I’ve played so far has carried the same level of depth and intrigue. Although part of the credit may go to the existing Walking Dead meta, the majority of praise has to go to the developers at Skydance Interactive. We just hoped that the story lasted much longer and was influenced more by our choices. This is because most of the side mission were fairly self-contained, and your decisions during this time are inconsequential in the grand scheme of things.

Surviving the Dead in Virtual Reality

As with all VR titles, the most crucial part is always the gameplay. Now if you’ve ever wondered how you would fare in a zombie apocalypse, then this is probably as close as you’ll ever get (right now). Saints and Sinners does exceptionally well in emulating the experience of fighting the walking dead, while also ensuring you enjoy doing it.

The game has mechanics that are easy enough to follow but requires a lot of careful planning and thought. S&S is not a shooting gallery, and the combination of firearms, melee weapons and health items make a world of difference. This is why a major part of the game is crafting, as items and weapons you find can prove to be unreliable or even fatal. In your home base, these are divided into workbenches specialising in each respective field. They all have something unique to offer, which ultimately affects how you experience the game. These take on the form of ‘recipes’ that you can either unlock by levelling up each crafting bench, or following clues to find them out in the world.

Thus scavenging for crafting materials incentivizes exploration, which again requires careful planning. S&S functions in a time cycle that restricts exploration during the day, which means your searches are limited to one area at a time. Each day that passes diminishes available resources, so you have to make sure you’re picking what you need for the item you want. Luckily they give you the option to track the ingredients you need, so at least they don’t make it that hard.

In S&S, you’ll find that melee weapons are your closest and most trusted friends. From knives and nailed bats to swords and ‘shredder’ claws, the game gives you a wide arsenal and a number of ways to slay. However, if you’re thinking that killing zombies will be as easy as a tinder swipe, then you’re gravely mistaken. As George A. Romero often portrayed in Night of the Living Dead and its follow ups, zombies may be dumb and slow but when grouped together, they’re the most dangerous things on the planet.

This is why combat is both terrifying and exhilarating, as dispatching a single walker might be easy but five or six is enough to make you sweat. Add to the fact that you are reliant on both your stamina and weapon’s durability, the failure of either or both will guarantee a scream and loss of composure. Fortunately the developers were kind enough to add a feature that notifies you of an incoming walker, but this doesn’t mean that jump scares are out of the equation. Tension never really goes away no matter how far you get in the game, as the growing number of walkers you encounter will constantly keep you on your toes.

As far as experience on the PSVR goes, Saints and Sinners is an amazing port for the system. The game is very responsive and easy to learn, with a control configuration that feels comfortable. Tracking is excellent with a wide range of motion, which is essential to the game’s combat system. So feel free to shove, stab and even dismember any walker you see marching towards you. The graphic novel art style also helps you achieve immersion quite easily in Saints and Sinners. Due to the grey back drop, muted colours and defined lines, draw distance and jaggies become less of a concern unless you really inspect your surroundings. This is an issue I was happy to get over with S&S, as some PSVR titles have thrown me off with very blurry environments that eventually made me feel nauseous. It’s safe to say I didn’t have this problem with the game, as I was able to play through it comfortably for an extended period of time.

The only issue I had with the port (or the gameplay in general) is brightness. The game is just too dark sometimes and I wish they added the option to increase the level even just a bit. While I understand that it’s supposed to be atmospheric and tense, it can be pretty hard to do anything when you can’t see what’s in front of you. Your flashlight should’ve remedied this problem, but it gives you very limited and washed out illumination.

Overall, The Walking Dead: Saints and Sinners is a definite must have for the PSVR. It is not a ‘tie-in’ by any measure and preserves an identity that earns its spot in the over all Walking Dead Universe. Even if you aren’t familiar or don’t like the franchise, there’s plenty of reasons to pick up the game. From the storytelling and innovative gameplay, to just wanting to kill zombies in the most creative ways, Saints and Sinners has got something for you. However, tread carefully as the game might be too tense for someone feint of heart or uncomfortable around excessive blood and gore.

I honestly had some reservations about this game, as not a lot of TWD based titles have been as noteworthy as the Telltale’s series. Furthermore, most PSVR games I’ve played that featured zombies were shooting galleries, so it was exciting to see Skydance Interactive take a different direction. If you’ve been looking for a reason to pick up a PSVR and are a fan of zombie slaying, The Walking Dead: Saints and Sinners makes a pretty good argument to jump aboard.

View all posts by vaultraccoon